The success of WikiTree is based on its community of volunteer genealogists (see the member gallery for a few of them) but there is a small team that supports the community.

Contact the WikiTree team at info@wikitree.com or use this Private Message form. Please note that this is not for "customer service." As a free, volunteer-based website, we don't have a customer service team to answer questions. If you have a question ask it in our community's Genealogist-to-Genealogist (G2G) Forum. For more personal one-on-one assistance, a volunteer mentor may be able to help you.

When not on WikiTree, Abby works as a small-town librarian. Her family maintains a small hobby farm and homeschools their children.

Abby is a big sci-fi/fantasy fan. So much so that she gives the farm animals names like Chewbacca, Thorn, and Princess Pi, and came close to naming her daughter Eowyn, for the Lord of the Rings character. (It's a good thing she didn't. Can you imagine a poor girl growing up with that name?!)

Eowyn Langholf, whose parents named her for the Lord of the Rings character, is our "Forest Elf."

Calling her a Forest Elf enables us to be vague about her responsibilities. This is important because she does so ... darn ... much ... including an overall responsibility to make sure that things that need to get done by the team get done. If we wanted to be more professional-sounding we could call her a team manager or general manager.

Eowyn has many years of genealogy experience, starting at a young age when she was tagging along with her mother who was volunteering at a family history library, and including three years as a professional genealogist.

Long before becoming a team member, Paul Bech was one of our earliest active volunteers. He helped pioneer the usage of free-space profiles and categories, created the Genealogy Help section, leads the Australian Convicts and First Settlers project, and took it upon himself to create this video introduction to using WikiTree.

If you're dealing with an Unresponsive Profile Manager or a 150-year-old profile that isn't being openly shared, Paul is the man to contact.

Paul has been tracing his genealogy for over 40 years. He focuses on his Oxley and Standen lines (both from Kent, England; came to Australia in 1839 and 1841), and his Hayes, Wall, and Bech families (from Korsor, Denmark).

His wide range of other interests include photography, astronomy, "bushwalking" (that's Aussie-speak for hiking), cycling, bowling, and science fiction.

Steve became a WikiTreer in April of 2012. He has helped lead a number of key projects, including the Categorization, Cemeteries, and Templates projects, and can often be found answering questions and supporting members in the G2G forum. Outside of WikiTree, he is a registered member of the Guild of One-Name Studies, is a member of his local historical society, and contributors to his town's historical museum.

As a team member, he uses his technical and organizational abilities to make our behind-the-scenes processes more efficient, helps to prioritize and implement new features, and aids in team resiliency.

As a team member her main responsibility is to lead the WikiTree Apps Project and encourage the creation of more independent apps that use our API. She is also in charge of tracking and prioritizing improvements and bug fixes, and helps with pre-release testing.

For more about Jamie see her blog interview.

Julie has been heavily involved in essential WikiTree projects such as the Greeters and Mentors for years. She now helps administer Mentors, Rangers, Moderators and Mediators and supports the people who work so hard to keep the tree safe and fun.

When she's not answering emails, you can usually find her wandering around the tree and falling down the occasional rabbit hole.

For more about Julie, see her "Meet Our Members" interview from shortly before she joined the team.

Mindy has been a member since 2017 and joined the team in 2021. She leads the WikiTree Challenge, coordinates other challenges including the Connect-a-Thon, Source-a-Thon, and other marathon events, and is helping Project Leaders organize new challenges.

For more about Mindy, see her "Meet Our Members" interview.

Aleš's contributions to WikiTree have been immense, and he's opening up new possibilities for the community every day.

Aleš has leveraged his background in big data to analyze WikiTree's public database in creative ways. The center of his work here is WikiTree+ and the Data Doctors Project. Although the project is based entirely on Aleš's work, it's not just his exceptional technical abilities that make the project special. He listens to other members and attempts to give them what they need to improve our shared tree.

Aleš started the Data Doctors Project as a volunteer with no official connection to WikiTree, and is continuing to run it independently.

As a team member, he's ranging across the entire landscape of our operations. He's finding innumerable ways to contribute, including with GEDCOM processing and search. We don't know where his work will lead, but we expect that when the history of WikiTree is written, Aleš will be described as a transformational figure.

Chris has been leading online communities since 1994. The first was a non-profit organization for connecting libertarians called Free-Market.Net: The Freedom Network. In 2002 he started the collaborative Q&A site FAQ Farm, also known as WikiAnswers, which later became Answers.com and, for some months, one of the top 20 websites in the world.

In 2008 Chris dedicated himself to the ideal of a free collaborative family tree — something to connect the human family and to make learning about your genealogy completely free and accessible to everyone. This is a lofty ideal, but it's not just puffy fluffy rhetoric. The WikiTree community is now making it a reality, and Chris has pledged to keep WikiTree free. He works hard alongside all the WikiTreers who share the mission.

Chris's own ancestors are from New England, Nova Scotia, and Newfoundland — before that, all around Northwestern Europe. He grew up in Massachusetts and has lived in New York, Chicago, and London. He now lives with his wife and daughter in the far northern suburbs of New York City. 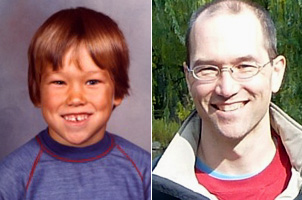 Brian is our system administrator. Our lead programmer. Our hacker-in-chief.

Brian's programming experience goes way back to his Commodore 64. He can proudly boast that programs he wrote for that system were published in COMPUTE!'s Gazette. Literally, published. This 1980s print magazine published programs in their machine-readable form.

If you only read human languages you're probably more familiar with Brian's other published works, such as "The Spectroscopic Orbit and Subsynchronous Rotation of the Herbig Ae/Be Star TY CrA." Not human-readable enough? Then you've certainly seen his bestselling novel, Eclipsing Spectroscopic Binary Systems in Love. (Just kidding.)

Brian has a Ph.D. in astronomy from the University of Wisconsin. Lest you think this genius never gets outside, he's also an avid soccer player. And he enjoys time with his family researching their Irish roots.

For personal messages you can also use abby@, ales@, chris@, eowyn@, julie@, jamie@, mindy@, paul@, sarah@, or steve@. Please do not send the same message to more than one of us. If your message isn't for one person in particular, use info@.

If your message doesn't have to be private use G2G instead. G2G, our genealogist-to-genealogist community forum, is where most questions are answered. Since we're such a small team — and we have to keep it this way to be a 100% free website — members generally answer each others' questions.